Diabetes mellitus is a metabolic disease, that is characterized by glucose, lipid and protein metabolism disorder and is due to total or partial insulin deficiency, causing increased titres of blood glucose. Diabetes mellitus is considered as one of the biggest challenges of public health in 21st century, as it affects a great percentage of patients worldwide.

Types of Diabetes Mellitus are:

Diagnosis and therapy of Diabetes Mellitus

Early diagnosis of diabetes mellitus constitutes the initial and most important step in the accurate handling of a patient. The sooner the disease is diagnosed and cured, the better its prognosis is. Other crucial steps in diabetes mellitus handling are:
• Diabetic patient’s training concerning his dietary habits, increase in physical activity and adoption of a more sanitary way of life.
• Diabetic patient’s training in blood glucose automonitoring and insulin administration
• The elimination of diabetes risk factors (smoking, blood hypertension and lipid concentration control)

Diabetes mellitus requires an individualized approach due to the different attitude and needs of each patient. Moreover, as insulin pathway is involved in the function of various systems of the human body, an endocrinologist is able to face properly every hormonal disorder.

IMAGE – THE ROLE OF INSULIN PATHWAY 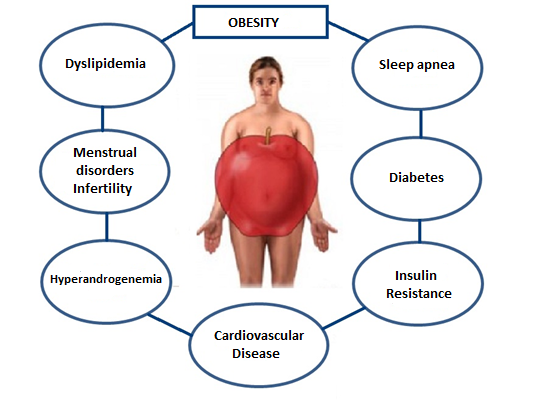 In this context, the Department of Endocrinology is one of the few centres that have incorporated a 24 hour glucose monitoring system in the treatment options/methods. Via this system, a thread like  sensor is  inserted under the patient’s skin in a patch type appearance  for a duration of 4-7 days and measures blood glucose around the clock, creating daily blood glucose concentration curves. Consequently, using these curves, the endocrinologist is able to adapt patients’ medication aiming at the most accurate glycemic control.

At image 4 below, one can clearly see a) before treatment modification: blood sugar fluctuations during the whole day for four days, where different colors correspond to different days, b) the same patient after treatment modification: the patient’s daily blood sugar fluctuations are now regulated , while she is recording her daily diet.
These data allow the endocrinologist to adjust patients’ treatment in order to achieve optimum glycemic control. 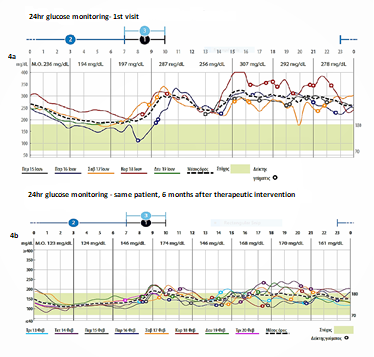